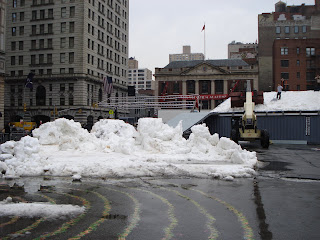 It sounds like a great idea- hold a snowboarding event smack in the middle of NYC at Union Square. Plan that event for February 7th, which should insure that even if you have to import snow, it won't melt. Well, going the way of many best laid plans, event organizers could not have planned for 60 degree temperatures and a boatload of rain on the way. It should however get cooler and snowier by Saturday night- right in time to break down the ramps and move the whole production out of town.
Union Square Pro Rail Jam and Winter Jam Feb. 7th and 9th (Snowboard Mag)
Email Post
Labels: Union Square