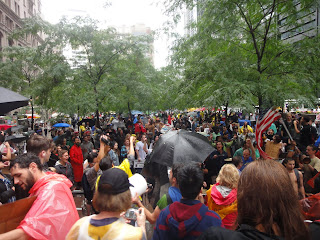 It all started with my desire for a cracked pepper turkey sandwich last Saturday. The sandwich was to come from my favorite deli on 13th and University, a block from Union Square in Manhattan and a block from my office. As I walked up Broadway through the stench of the unneeded nuisance of yet another street fair it was clear something was up. A helicopter hovered and circled to my North, and as I turned onto University I happened upon a sea of blue, perhaps 100 or 150 police officers, police vans, and a street blocked to vehicular traffic. I saw of few of the 80 or so arrested moments before being loaded into vans. I missed the melee by perhaps 5 or 10 minutes which included the pepper spraying of seemingly innocent women and it was revealed later thanks to You Tube, another group of protesters and or pedestrians. I could certainly see how, if I was a few minutes later, my quest for a sandwich could have possibly landed me in the slammer. My interest was piqued. I went to Union Square where there were at least a couple hundred police. Park Avenue was closed to accommodate police personnel. Traffic cut off Westbound on 14th and was at a standstill in all directions. I lingered for an hour or so. There were no protesters, just curious crowds using digital cameras and smart phones to take pictures of hordes of police, many of whom were wondering what the hell they were doing there. The police and the crowds eventually dissipated and to me, this was just another day in NYC. Surreal for a moment or two, but another day, which I figured would simply fade into the tapestry that is everyday life here in the city.

Hours later, I had time to check the net to see if there was anything about the events on Twitter, and that is when I first realized that this was turning into a real story. Several videos had surfaced that showed a police officer pepper spraying protesters. While the incident was quickly dismissed by the police commissioner, combine helpless women, a senior police officer, pepper spray and video that combines all 3 and such a story has stickiness. As it happens, it was probably the turning point for what initially looked like a fledgling effort by a small band of anti-Wall Street protesters known as Occupy Wall Street.

Occupy Wall Street is a group that started camping out at Zuccotti Park on Liberty Street on Sept 17th and has been holding daily marches on Wall Street at the opening bell and closing bell. By all accounts there were perhaps a hundred people camping out nightly and perhaps a couple thousand that came to march last Saturday. In reality, that may have been the peak but for the attention that the protest got from Saturday's incidents.

Media coverage was sparring, vague, and dismissive of the protester's efforts. They we labeled as "hippies", 'trust fund kids complaining of corporate greed while tapping away on their Apple iPads', and more or less slackers that are too lazy to get a job, were disorganized, with no focus, and no clearly defined objectives. Well, given that I am a mere 2 subway stops from the epicenter of this movement it was time for a look.

I arrived just around 4pm yesterday (9/29) in the midst of a torrential downpour. I found a park that spans a square city block that was packed with various gear mostly covered with blue tarps: soaking cardboard signs, a stockpile of canned goods, drinks and around 100 protesters. My first reaction was, well, I'm sure my timing was poor and people had probably scurried to seek shelter from the rain, but still, there were only 100 or so people there. As it turns out, I had arrived when the afternoon march was taking place. Soon the rain was gone and a couple hundred marchers returned with drums, sax, and chants of "all day, all week, occupy Wall Street". I worked my way through the crowd. I talked to organizers, police, bystanders, and protesters of all ages. I found some major misconceptions on the part of the media.

First, there was no confusion on the part of protesters as to their cause. There was a common thread- a revolt against the income inequality that has mounted in this country over the past couple of generations. There was a revolt against a political system that they see as owned by corporate America. The protesters see themselves as representative of the 99 percent of Americans who are getting screwed by the top 1 percent. The viewpoints that I heard today were no different than what I hear on TV from liberal pundits that range from Rachel Maddow to John Stewart, except these folks are on the street espousing these views rather than get paid millions to espouse such views on cable tv.

Another misconception is that these folks are a bunch of sloths and slackers. Unlike many protests which I have seen over the past 20 years, these are not a bunch of Vietnam Era hippies that show up at every protest. Sure there or some of those, but the crowd is decidedly under 40. There are plenty of students, independent contractors, and people coming down after work, at lunch, etc.. Sure, there are hippie types and certainly a requisite group of posers, but the crowd was far more representative and mainstream in opinions and background than I expected.

Finally, the protestors seem far more organized than they are given credit for. There are several committees that meet daily with topics that range from art to sanitation, food, and media. The committees later meet in a "General Assembly" to discuss the results of the committee meetings and to plan the day ahead. They have daily schedules planned and have fully utilized the internet to get their word out on Twitter and numerous blogs that are live streaming from Zuccotti Park. They have also managed to branch out with various cities such as Chicago, New Orleans, and San Fran planning their own "occupations".

Although the group has largely been ignored by the media, celebrity appearances by the likes of Michael Moore, former Gov. David Patterson and potential appearances by band Radiohead have improved coverage of late. Add to that several unions have pledged solidarity with Occupy Wall Street including the Transit Workers Union and the Teachers Union to name just a couple. The unions are likely to join the protesters on a legal march this Wednesday.

While it is anyone's guess how large this movement grows, and how long people will stick it out to occupy Zuccotti Park, Occupy Wall Street has momentum. While the movement has been dismissed, it has grown. One can only speculate how this turns once the media begins to pay some real attention.

*I will be updating the blog on a regular basis as events warrant.