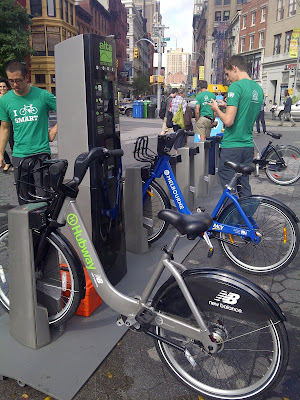 New York City has seen many changes in the streetscape during the Mayor Bloomberg/Sadik-Khan era including miles and miles of bike lanes, public plazas replacing roadways, and the "Summer Streets" program, but perhaps all this pales in comparison to the city's ambitious Bike Share program that is to be implemented this coming Spring and Summer.

If you haven't heard about it, the plan is to have a private company, Alta, to provide 10,000 bikes for Manhattan residents to share for a fee ($100 annually, for instance). The bikes will be located at 600 different locations throughout Manhattan, south of 79th Street, although the final boundaries have yet to be determined.

I met with a handful of D.O.T. employees last week in Union Square who were demonstrating Alta's solar powered bike lock stands and providing free rides to whoever wanted to take a quick joyride and hand over a form of id. There are many brilliant aspects to the plan. It is privately funded. The bikes are heavy enough to not build up bike messenger type speed, and they are equipped with GPS in case anyone thinks about taking them for a more permanent ride. Not sure if a bike is available at your corner stand? There's an app for that! People stranded on Avenue D or York Avenue or on the Hudson will soon have a healthy and cost-effective way to get to the subway. It all sounds great until you get to the logistics, and this is where I think an epic fail may be in the works. One simple point is being overlooked.

Space in Manhattan is at a premium, and, these bike stands take up an incredible amount of space. The bike stand that Alta displayed, according to the D.O.T. rep is what they will actually roll out on the streets. The stands are broken into 10' long segments. Segments with the credit card machine hold 3 bikes, and an interlocking segment without holds 4 bikes. So, for seven bikes you are taking up a 20' by approximately 5'-6' to accommodate the length of the bikes. That's at least 100 square feet for 7 bikes. So, for 10,000 bikes we are talking about 142,000sf of sidewalk space. But wait, when asked how many spaces would be required for the ebb and flow of daily bike commuters (so there are enough spaces at a subway during the a.m. rush for instance) the answer is double. So, now we have 20,000 bike spaces taking up 282,000sf. While that may not sound like a ton of space compared to a whole island, let's not forget that these will all be placed in high traffic areas. With the average size of a NYC sidewalk maybe 15' (pure guesstimate), do you think people will be happy with 40 percent of a sidewalk in a high traffic area crowded with rows of bicycles? Also, let's not forget that a high traffic area is likely to need more than one 20' string of bikes. At an express subway stop wouldn't you think that 100 bikes would be a minimal number for the masses. So there you are looking at 200 spaces, or 571 feet of bike stations (5'-6' wide). The D.O.T. reps realise that there won't be available sidewalk space needed in all locations, which is likely an understatement, so they suggested that in some cases, parking spots could be usurped to the cause. With fights over parking spots a daily reality in NYC, do they really think that taking over parking spots will be popular with drivers, or with merchants that depend on the spots for deliveries or potential customers to park?

For the record, I am a proponent of the plan and I look forward to more bike lanes, a more bike friendly and bike safe city. However, I think the city and Alta, are setting themselves up for a big backlash and potentially a war over this plan if rolled out (unintended pun) as it appears it will next summer. People beyond the usual suspects of the likes of the NY Post and Rosanna Scotto are more than likely to be annoyed, andgered, and potentially outraged. This could prove to be a major setback for biking in the city. The best thing they could possibly do is to try to figure out how to fit more bikes in a smaller space to minimize the impact on our already crowded sidewalks in already crowded spaces. When planning such an ambitious plan the city, D.O.T. should tread lightly (pun intended) and intelligently. Good luck!

*Thanks again for reading A. Fine Blog! It is great to be back. If you see this story, in word or content, recycled by the lazy media, please give me a heads up at andrew@afinecompany.com. Thanks, Andrew
Email Post
Labels: Union Square Unusual