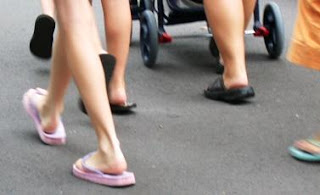 I've been watching very carefully with trepidation over the past week as Spring has officially sprung. What for? Daffodils? Cherry Blossoms? No, quite the opposite, the return of the dreaded Flip Flop! I remember distinctly last year on my trip to the equally dreaded 4,5,6 train, on the first warm day of the year, hearing that ever present clip, clop, clop. At first I looked around looking for a horse, thinking "what would a horse be doing on Lexington Avenue"? Then I looked down to see that I was surrounded by number of young women on their way to work wearing flip flops! Intrigued and equally dismayed I had my eye out as I hopped the overcrowded 4 train for more of the same. Sure enough, they were everywhere! Worse yet, they were a sight to make your eyes sore. Now if you were a foot model on your day off, maybe I wouldn't have such a problem, but foot models most are not. Have some self respect ladies, look at your feet, and if you are plagued by corns, bunions, and hammertoes, keep them to yourself! Nobody want to see them! Not to mention, a fresh coat of nail polish wouldn't hurt either. As much as ugly feet are offensive, the fact that so many people see wearing flip flops as appropriate footwear for work is equally dismaying. Have we really gone this far down the road to casual sloppiness. I mean, what's next, bikini tops?
O k , so much for my rant. Here is the good news. I have been on the lookout for the march of the flip flop this year and well, it still early yet, but I have been pleasantly surprised to see more dignified sandals, ballet flats, etc. out on the streets. Of course, the "croc" is gaining in popularity (that a whole other rant, people will be embarrassed a couple years down the road that they wore such a stupid looking thing), but at least they keep foot abnormalities discreet.
We can only hope the trend continues and that they days of the flip flop are numbered. Next up, those annoying people who wear sweat suits for air travel.
Email Post