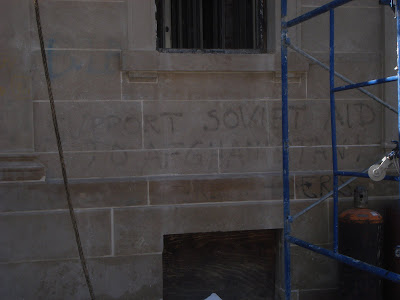 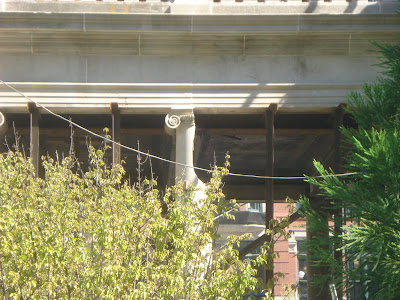 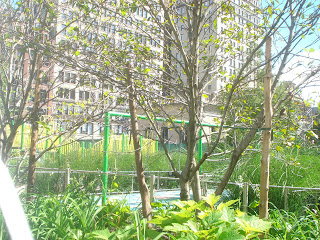 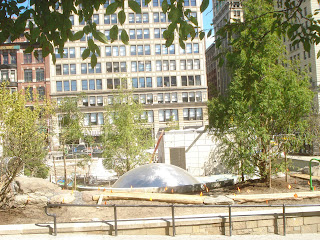 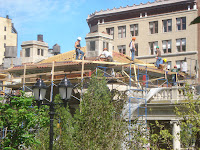 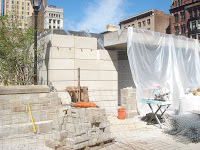 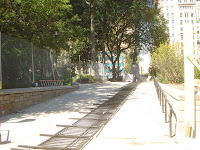 We are close, so close, to the completion of the Union Square Park renovation project! Originally slated for a Fall 2009 completion, it looks like they will be pretty close, if not right on time.

According to The Union Square Partnership, it looks like kids and parents from all over the area will be thankful come Thanksgiving Day! The project that I have previously described as a well-oiled machine, has had a couple of challenges in the final stages. First, a rotting column on the south side of the pavilion had to be supported so that roof work could continue (that caused a delay of a few weeks in that part of the project), and will be re-rebarred and recast in the very near future. Perhaps more interesting though is the latest snag -- cold war-era graffiti that just won't come off. Among the various scrawlings: "SUPPORT SOVIET AID TO AFGHANISTAN". Talk about a catch-22! Union Square partners also have a bit of a dilemma -- either a treatment (micro-abrasion) which will keep the ghost of the graffiti, leaving it, or doing something that may require landmarks approval.

Aside from those 2 issues, everything is progressing at a fantastic clip. The massive playground with equipment not seen before in NYC, is just about ready. Among the features, a huge stainless steel orb called "magic mountain" for climbing, fantastic landscaping, and multi-colored rubber foam tiles that keep cool and also direct runoff water to the 25' and 30' trees which are newly planted. The public restrooms, to be attended during daylight hours, are just about finished. Access for men and women will be available from outside the playground, while the playground will have a family bathroom accessible from the inside of the playground. Re-purposing is happening all over. Stones from the original wall that circles the park and terra cotta from the pavilion roof have been cleaned up and reused on-site. Another added benefit to the renovation is that construction unearthed major problems with the 16th Street transverse which, in turn forced the Parks Department to renovate and replace the walkway. The renovated walkway also has lighting for the first time, which matches the aesthetic of the bishops crook lampposts throughout the park. The park looks magical, and the kids are sure to be thrilled. Parents will love the multiple vantage points to watch the kids, ample benches, pleasant and shading landscaping, and yes, the clean potty will make a huge difference.

The Union Square Partnership reminds me that this doesn't come cheap. While it has been a challenging fund-raising environment this year for obvious reasons, the USP is doing pretty well, but every dime counts. So, if you are feeling charitable and have a great appetite, the USP is throwing its annual "Harvest In The Park" bash this Thursday night. With the coupon code "opentable" advance general admission is just $95.00, and you get to sample an exotic array of food and beverage from the restaurants which line the park. It's a nice way of saying thanks for doing a great job on the Park and a great way to enjoy some exceptional culinary treats.