On Metropolitan Hill (77th to 86th Street, West of Third Avenue) there is a scarcity of new residential condo developments. Those that are currently rising are decidedly high end, and despite being far from ready for occupancy, mostly spoken for. Here is a look at what is percolating in the neighborhood:

151 East 78th Street. This tasteful, classic, Candela inspired effort by architect Peter Pennoyer has topped and is currently ensconced in bright white wrap. Beneath the wrap, the building has not yet been faced, so we are still anxiously awaiting the red brick and limestone facade which should seem to blend seamlessly into its prewar environment. The 16 story building has 14 units, at least 10 of them in contract at an average of approximately $3200/psf. No worries, the nearly 7000sf Penthouse is still listed as available on Streeteasy for a mere $29,500,000. 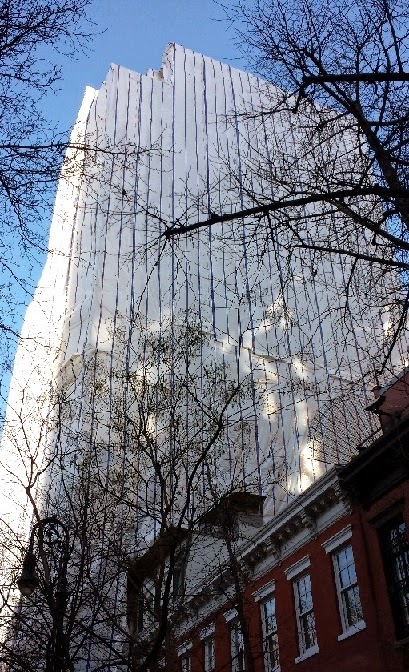 60 East 86th Street. It seems like just yesterday that the foundation was being poured, yet to my surprise this modernist condo by noted architect Thomas Juul-Hansen is rising 4 stories above the street. The "fluted grey limestone" condo will rise 19 stories and include 15 units, of which at least 11 are already in contract. Average prices have been around $3200psf, give or take, which seems to be the going rate for new luxury condos in the area.

155 East 79th Street. Topped at 14 stories, this boutique condominium will be comprised of only 7 units, and at most only 2 units remain available.The building will have a two story limestone base, and some sort of very upscale grey brick above (similar to 135 E 79th Street). All of the units are duplex, 4300sf or larger, and again, averaging over $3000/psf.

1010 Park Avenue. No real action aside from a scaffold on the former rectory of Park Avenue Christian, just south of East 85th Street. The development, purchased by Extell for $25 Million is expected to rise 16 stories but has had a tough time of it with Landmarks thus far. Nonetheless, I see a future "Lot Line Follies" blog considering the residents next door at 1000 Park Avenue.

Update (1/14/15): 1010 Park Avenue has passed Landmarks and is now a go! 16 stories of luxurious bliss coming soon. Let the "Lot Line Follies" begin! Full Story on the approved plan over at Curbed.

It is interesting to note, of the three condos currently in progress, and none finished, we have a total of 49 stories, 36 total units, and only 10 (if that many) still available. While north of $3000/psf is far from affordable, it is of some consolation that the new additions to Metropolitan Hill are tasteful and in keeping with neighborhood aesthetics, rather than lifeless glass boxes.