A. Fine Company Sells to Starchitect Thom Mayne in Soho 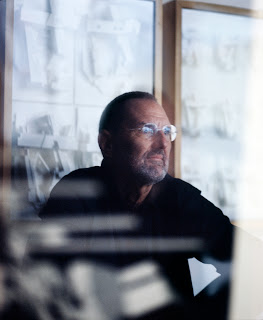 A. Fine Company, Inc. is both pleased and proud to announce that it has represented Starchitect and Pritzker Prize winner Thom Mayne of Morphosis and acted as his broker for his purchase of a wonderful prewar loft in the heart of Soho. We had to stand idly by while our favorite blog curbed.com was reporting rumors of the starchitect's apartment shopping in New York, when in fact, we had him in contract. Well, the deal has been sealed, and it's officially done (look for pr piece following soon), and the Maynes will take Manhattan this September. The Maynes had been working with several brokers over the past 3 years and decided on working with A. Fine after meeting agent extraordinaire Jeff Hairston Smith, who they saw as an 'anti-broker'. They also liked that we were a small company with exceptional and personal service.
What's it like to work with a Starchitect? Well, it was alot of fun, but it's not fair to mention just Thom, as I would figure that a fair amount of his success can be attributed to his wife and Morphosis exec Blythe Mayne. Together, they are the consummate power couple. Blythe is the ultimate negotiator, while Thom is Mr. Conceptual. Walk into a room with Thom and you'd think he was wearing 4-D glasses. You can clearly see that his brain is working on a different wavelength- he is seeing walls, angles, and lines that are not there, but you can tell that he is seeing them. But, when it comes to the bottom line, dotting the eyes and crossing the it's it all Blythe, and she is exceptional at it. When A. Fine Company is bought out some time in the distant future, I'm calling Blythe to negotiate terms for me! All said, I was most impressed by how this couple works together, they truly do as the cliche says "complete each other". It's no wonder Morphosis is a brilliant success. Welcome to New York, Thom and Blythe!
Email Post
Labels: South of 34th