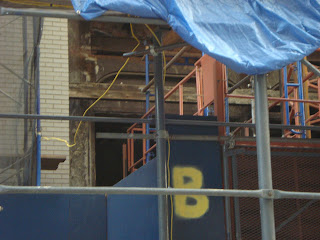 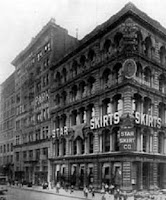 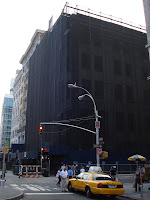 It's a building that has always been a curiosity to me, that bland white brick monolith on the corner of 15th and Union Square West. After all, on a square with so much history and brilliant architecture, there seems that there would be no place for such a bland, worthless structure. What I never realized, until I searched deeper, is what lies beneath this lifeless shell. For just a moment and in very little pieces, history is making a final cameo appearance on the Square.
It turns out that underneath that bland white shell is what used to be a wonderful cast iron building, which from the 1870's til 1905 housed the original Tiffany's. After Tiffany's left for 37th Street and Fifth Avenue, the building became a clothing factory and eventually the home of Amalgamated Bank, named for the Amalgamated Clothing Workers Union (it's called Union Square for a reason). Turns out that since part of the exterior was crumbling, during the 1950's Amalgamated decided to put the plainest of white brick shells over the exterior to prevent injury and liability. That shell has stood about as welcoming as the fortunately defunct NY Coliseum at Columbus Circle until this year. Last year the building was sold by Amalgamated for $80 Million to Brack Capital, who has been stripping the building to the original steel frame which looks to be in exceptional condition considering that it's nearly 131 years old. As the hideous white brick is stripped there are glimpses of the original Tiffany building facade peaking out here and there. That facade is making it's final, brief curtain call, but not all hope is lost. The developer, who, is adding 7 stories and making a condo of it, is well known for preserving history. Brack did a wonderful job restoring the Cass Gilbert building at 90 West Street to it's original glory, and promises to acknowledge the building's architecture and historical significance. Whatever they do, I'm sure it will be a major improvement.
More:
Brack Capital's plans for 15 USW (findarticles.com)
New York Times on Tiffany Building (NY Times)
Lost City on Tiffany Building (Lost City)