From The Courthouse Steps...Manhattan Foreclosures In Action 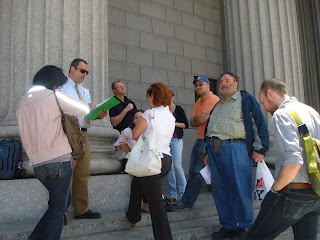 A crowd gathers around the auctioneer at 60 Centre Street

It was quite a scene today on the courthouse steps of 60 Centre Street as the public auction of foreclosed properties was being conducted on a brilliant day. There was a small crowd of 14 or so potential bidders, colorful characters whose make-up seemed to consist mainly of a group that was pulled out of an OTB . The group included 3 or 4 pros (I call them sharks), a few curious newbies, and a handful of people who looked like they had nothing better to do (and maybe OTB wasn't open yet). All gathered for the opportunity to get a rare deal or watch a rare deal on a Manhattan apartment happen. I spoke at length with both a couple of pros and some newbies and here are my observations:

*Out of 6 or 8 auction scheduled only 2 happened and only one was bought by a participant, the other by the bank. A good deal appeared to be had on the one apartment, 320 East 35th St. #3G. The apartment is a jr.1 bed in an elevator coop with part-time doorman was sold for $302,000.. The same line a couple of flights up just went into contract for around $420,000..

* According to the auctioneer, approximately 80% of the Manhattan coop auctions never happen.

*The apartment I reported on last week, the parlor floor at 24 east 82nd Street (the Whitney/Hearst whatever place) was pulled from the block after an order to show cause pushed it from the schedule. According to a rep of the owner, the owner managed to sell the apartment on her own for north of $2.8Mil..

*Overall, according to the pros, the number of properties that goes to auction in the 5 boroughs, is up about 50% over last year. The change in Manhattan has be negligible, but 'lots in Queens'. Quized further, it seems that Eastern Queens is the most auctioned, while they haven't heard of any in LIC.

*As for the larger market, it seems the middle of Long Island is worst hit. According to the auctioneer, Freeport is the worst. "I've auctioned off most of Freeport" he remarked.

*According to a pro, about 1/2 of all coops bought at auction never close and often turn into a fight to get the deposit back.

If you buy at auction, there are numerous potential pitfalls. Deals are expected to close within 30 days or you default and forfeit the 10% deposit. While banks and lawyers will sometimes give an extension beyond the 30 days, sometimes they won't and it turns into a protracted legal fight. And, just try getting a foreclosure through a coop board in 30 days- it won't happen. Additionally, apartments are sold sight unseen and may have liens, 2nd mortgages, back maintenance payments, etc., so even with a great deal of due diligence, you can still get stung. As one pro described it, buying at foreclosure auctions is not for the faint at heart, or those adverse to extreme risk. While on occasion there are deals to be had, in many ways it's like sitting at an OTB and waiting for a long shot to come in.
Email Post