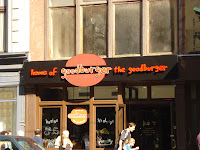 Well, I guess I should be thankful. Working in Union Square, it has been a long quest for a good, reasonably priced, fast and fresh burger. I have finally found it in Goodburger (http://www.goodburgerny.com/), which has just opened on Broadway between 17th and 18th Streets. Goodburger is the offspring of "Burger Joint", the semi-secret and exceptional burger place hidden in the lobby of Le Parker Meridien hotel. If you haven't been there, make a point of going, it is one of the best burgers in New York. Goodburger was founded by former staffers of "Burger Joint" and it shows. While not quite as good, it's pretty close, and it's much better than waiting in line 45 minutes at Shake Shack. So, if you have a hankering, Goodburger, is, well, pretty good!
For the record, the 3 best 3 burgers in NYC, in no particular order: Melon's, PJ Clarke's, and Burger Joint.
Email Post
Labels: Union Square