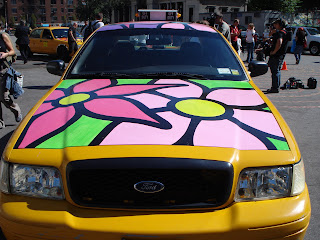 By now nearly everyone has seen them -- your typical yellow cabs, but covered in colorful flower decals. They seems to be sprouting and multiplying throughout the city. Well, it is all for a great cause; a project called "Gardens in Transit" by the non-profit charity called Portraits of Hope. The flowered decals are all hand-painted, mostly by sick and disabled children, as well as children from NY City schools. It is the brainchild of brothers Ed and Bernie Massey who founded the charity in 1995. According to Ed Massey, who I met in Union Square where cabs were being "flowered" one at a time, 2000 cabs have had the makeover. Mr. Massey's goal is to get all 23,000 cabs in NY City flowered by the first week of October. He is relying on his salesmanship and peer pressure applied by the New York cab riding public. The "exhibit" will last through December. More on the Charity: