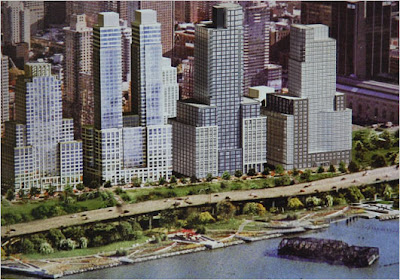 Credit crisis? What credit crisis? At least that's what Extell and Carlyle Group may be saying to themselves after lining up $613 Million for 2 new properties at Riverside South in what is 2008's largest construction loan.
Extell plans on putting up 2 towers, a 23 story rental and a 38 story combination rental/condo between 62nd and 63rd Street on Riverside Boulevard for a total of 880,000 square feet. Construction has commenced on the project which is expected to be completed in the first half of 2010.
Additionally, Extell reports that since 2006 they have sold 437 luxury condos at The Avery and The Rushmore since 2006, for a total of $788 Million (better than 70% thus far).
We all thank Extell for giving us a big piece of good news for both the real estate market and credit market in one shot. Keep up the great work guys!
Press Release (PR Newswire)
Email Post
Labels: Upper West Side