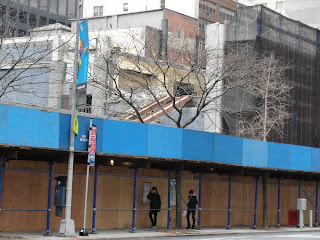 It has begun, finally! The public/private venture of RFK (Robert K. Futterman) at 57th Street and Second Avenue is underway in earnest! I took this shot a few days back and the former elementary school at the site is quickly vanishing. What goes in it's place? Two new schools, retail including Whole Foods, and eventually a 59 story residential tower (nothing definitive on condo vs. rental and in fact if and when that part will ever happen- that's phase 2). One thing we do know is that the elementary school, P.S. 59 is scheduled to open in September 2012. We also know that the High School of Art and Design will occupy the space as well. The benefit here is that the elementary school will triple in size, the high school will grow 40% and the building on East 63rd Street where P.S. 59 is now squatting will become P.S. 267 to alleviate crowding in other Upper East Side schools when the new P.S. 59 is finished. Got all that? As for Whole Foods? It looks pretty solid at this point, at least if you take the 250 East 57th Street website at face value.
Email Post
Labels: Midtown East