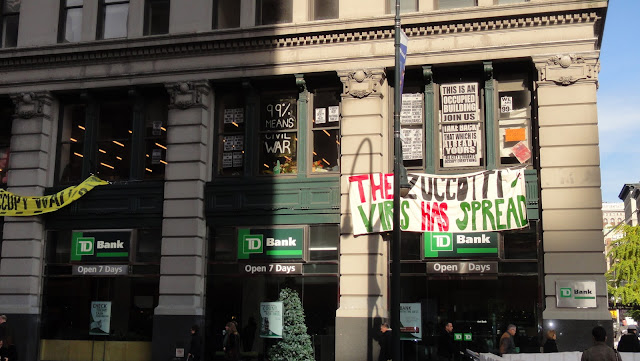 On Thursday afternoon thousands of protesters massed on the North end of Union Square Park, primarily students. The "National Day of Action" by Occupy wall Street was in full swing. After the Union Square Rally, the plan was to march to the next rally at Foley Square downtown. The marchers, if the hundreds of police present were any indication, were clearly expected to go the same way most of the came, down Broadway. However, the police were clearly caught off guard as the marchers decided to march across 16th Street to Fifth Avenue and then South for a reason that soon became clear to me. Aside from the freedom of movement and temporary lack of control by the police, a hundred or so of the crowd knew exactly where they were heading- to occupy the 2nd floor of the New School Building on 14th Street and Fifth Avenue. And there they continue to occupy at this hour.

I was in the area this afternoon (11/19), and according to the two university security guards posted at the door there are still 50 or so holding down the fort. From the outside, the occupation is apparent with various signs and banners somewhat ironically draped over the large signs for TD Bank that "occupy" the space below. Security at the building would not let me in and told me that they, themselves are not permitted by the university to enter the student center. After speaking with one occupier I was asked to wait for a guy named Clark. Clark informed me that there would be no comments to the media and no media access until the decision on how to handle the media was voted on at a General Assembly meeting. On the way out, a few occupiers opened up just a tad more and pointed me to their website, allcitystudentoccupation.com.

This is not the first time that the new school has been occupied, actually the fourth in recent years. The New York Times details the recent history of occupation and points out that the current school leadership is even more liberal and welcoming that previous leaders like former senator Bob Kerrey who had similar protesters arrested. One thing is for sure, these protesters are thinking! It sure is easier to occupy a building than a park this time of year!
Email Post
Labels: Union Square