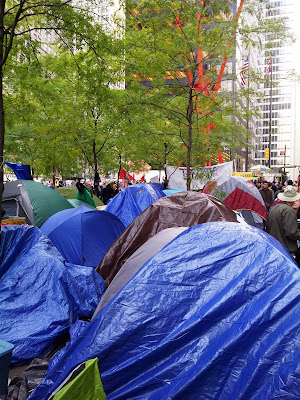 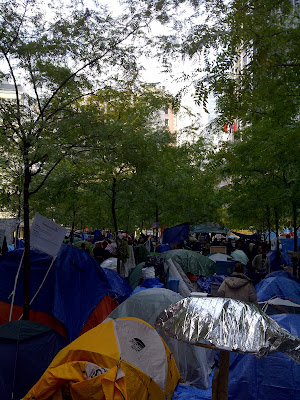 I've been making occasional visits to Zucotti Park to check on the evolution of the Occupy Wall Street movement, but my most recent visit yesterday (Nov. 3rd) really tested my sympathies.

There has been an evolution and it is not a pretty one. The big difference is that a few weeks back the crowds were impressive, idealistic and energized. Occupying wasn't easy. People were sleeping in the open air, crawling under tarps during downpours, doing their best to stay warm, and such incovenience only further convinced us of their conviction and resolve. But something has happened along the way, and one of the most dramatic changes is visual. Where a few weeks ago the park was packed with people, it is now packed with tents. So many tents in fact that better than 80 percent of the park is covered with them jammed side by side. The effect is that rather than seeing a sea of protesters, you see a hodge podge of beat-up tents. It no longer looks like a protest, but more like a shanty town. Since there is little room for people, while appearing crowded, the crowds are far less. And, the crowd is changing.

When I visited a few weeks ago, the crowd was far more diverse, and dare I say, sane. Now it is as if the crowd has been boiled down, reduced, and there are now far fewer bright eyed, idealistic college kids and far more crazy uncle charlie types. It had been a few weeks and I was skeptical of publications like the NY Post who I was afraid had the political persuasion and incentive to cast the crew of OCW as increasingly derelict. I hate to say it, but they have many points.

It looks like the crowd can be broken down into three groups:
-young people who think it is really cool to trip on acid (or some modern day equivalent), play drums and camp in the middle of Lower Manhattan,
-homeless and mentally unstable people who see the appeal of free food and enjoy the communal feeling of being with their own, and finally,
-the true idealists who believe in the cause and are doing their very best trying to promote and spread the message that income inequality and social injustice can no longer be tolerated.

You have to feel for the last group. I think most people can empathise to some degree with what they are fighting for. Unfortunately for them, this is New York City, and if you offer free food, eventually you will end up with plenty of rats.
Email Post
Labels: FiDi/BPC