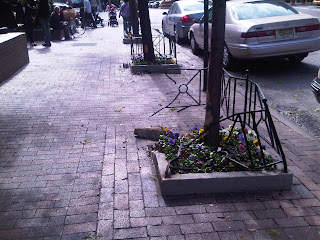 A late model maroon 4 door sedan driven by an elderly man with an elderly woman by his side took a potentially deadly turn onto the sidewalk on East 84th Street between 3rd and Lexington this morning at approximately 9 40am. The car came down the North sidewalk towards Third Avenue, striking 2 wrought iron planter fences and a tree before backing up and striking a large concrete planter and then going back into drive along the sidewalk narrowly missing 3 children and several adults at the corner of Third Avenue. The couple fled the scene by driving the wrong way down Third Avenue. Their whereabouts are unknown, however, nearby buildings are working with police to analyze videotape to get a plate number. The vehicle in question is missing a hubcap, left tail light and has extensive damage to both the front and rear end of the vehicle. East Siders beware!
Sent via BlackBerry by AT&T
Email Post
Labels: Upper East Side