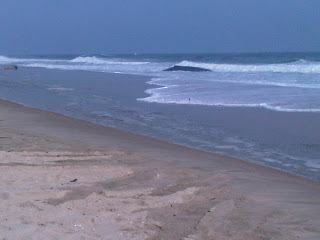 It is a sad sight indeed. A 25 foot long baby humpback whale beached in East Hampton, Long Island may be seeing its last tide. According to David Morin (from National Marine Fishery Service), the plan is to euthanize the animal at the next low tide, approximately 5pm today. Despite being sedated earlier today, the whale is able to flap its tail, flippers and blow its spout. The whale seems pretty active, but the chance of it getting out to sea before the vets get it with a deadly dart gun is virtually nil. Such beachings are very rare, Morin says he's only seen it twice and that the beaching is indicative of serious ill ness or possible being hit by a ship.
Hundreds have ventured the half mile down the beach to watch and say goodbye to the majestic beast.
Live from a jetty in East Hampton.
Sent via BlackBerry by AT&T
Email Post
Labels: Hamptons Unusual