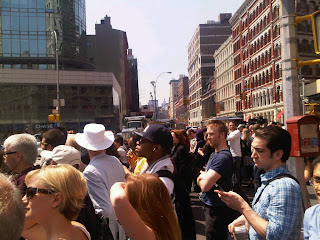 President Obama has just arrived at Cooper Union, just east of Astor Place in Manhattan. Streets were cordoned off throughout the area and the streets were lined with police, media trucks, and sand trucks. Snipers were apparent on at least one rooftop.
The motorcade was welcomed by a warm round of applause and cheers. No protesters were evident on 4th Avenue or Lafayette aside from one elderly lady who was murmuring something about torture and concentration camps, but chances are that she would probably have been doing so whether or not the President was in town. On Third Avenue there were a grand total of 7 protesters, one of whom was a vocal proponent of Obama, while the others were a group with diverse and mixed messages of pro and anti bank and one woman protesting in support of people "who are afraid of their bosses". What can I say, folks.

Sent via BlackBerry by AT&T