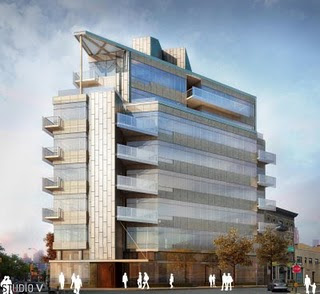 After much preparation and deliberation, the condo at the intersection of Vernon and Jackson in LIC has been named, and it is a no-brainer: "1 Vernon Jackson". This info was passed on directly to me from the developer. There was deliberation between "One" and "1", but, despite my preference for it being spelled out, it is too late! The decision has been made and the teaser website should be up any time now. Sales are expected to start (for real this time) in 3-4 weeks. Priced right (and there is no definitive word on pricing just yet), this pet project from Times Square with the thickest floors in LIC should be a winner. Stay tuned for more details and an official opening date.
Previously: It's A Condo, Shower With View Included
10-17 Half Skinned
LIC Mystery Revealed: 10-17 Jackson Shines!
Email Post
Labels: Long Island City