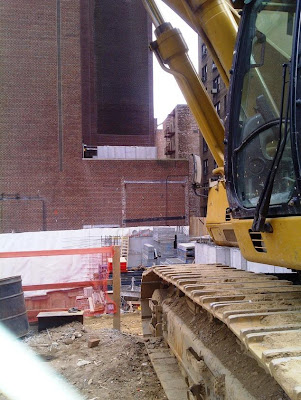 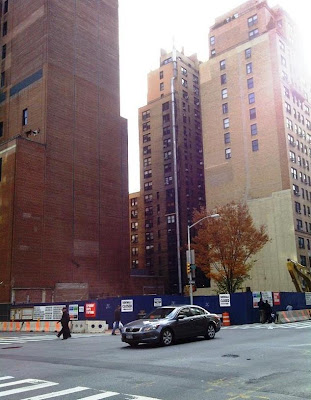 I've had several emails regarding 200 East 79th Street, an 85'x100' lot that was cleared in 2009 and subsequently joined the long list of developments that sat dormant as a vacant lot. The site, owned by the Wilf family of Minnesota Vikings and Skyline Development fame, was revitalized this summer and is now back on track. Pictured above you can see that the cellar(s) have been dug, and the retaining wall and foundation are under way.
According to DOB records the site will rise 19 stories, 210 feet and will contain just under 140,000 square feet of residential space and just over 6000sf of retail space. While there was word originally that it was going to be a rental building, the last I heard (as of a couple of months ago) is that it will rise as a condo. Again, according to city records, 57 units are planned. Do the math and we are looking at an average apartment size of over 2000sf. While these plans can be amended, at current, several floors will contain just 2 apartments sharing a floor plate of 8500sf. Big! Permit details also reveal a storage room and bike room in the cellar as well as common tenant facilities on the 2nd floor. Finally, Cetra/Ruddy remains the architect as was originally planned. There are no renderings yet available, but the original plan was not another ubiquitous sheet of glass, but more traditional architecture. I hope that holds true. Will update as more details dictate.
Email Post
Labels: Upper East Side