Toll Brothers' Touraine Condo A Clear Contender For Building Of The Year! 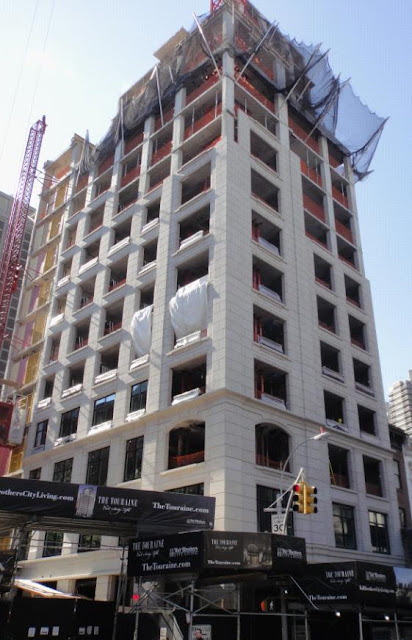 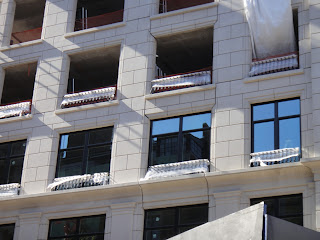 There was plenty of skepticism when it was announced that Toll Brothers had purchased the lot on the SE corner of 65th and Lexington Avenue and planned a 15 story "luxury" condominium. The doubters were aplenty. Toll, largely known for suburban "McMansions" had only recently started building upscale condos in the city, and those were largely a variety of modern structures in the outer boroughs. Could they build what was essentially billed as a pre-war reproduction? All indications are that the answer is a resounding yes! The Tourraine has now topped and much of the limestone exterior and wrought iron balconettes are now installed. The complimentary black framed windows are now following. The building, as it stands, is sexy. It exudes both a New York and a Parisian flair. Even some of the toughest and most cynical critics, like my friends over at the wired forum, have come up with one word reviews, like "gorgeous."

As much as this building is a hit from the aesthetic standpoint, the sales have been an absolute knockout! The building had a "soft opening" last October, and a lucky few went to contract at around the $1800 per square foot level. That was before Toll realised what a hot ticket they had (which didn't take long), and it can be safely assumed that prices climbed into the mid $2000's per square foot by the time they had sold out all but the final 2 penthouse residences. Those residences are asking just under $20Mil. and $13.67Mil, or an average above $4000 per square foot excluding outdoor space. All this without the use of an outside broker and before the building is near completion.

A great job by Toll Brothers for exceeding expectations in construction, pricing and consumer demand. Clearly a home run and contender for A. Fine Blog's coveted "Building of the Year".
Email Post
Labels: Upper East Side