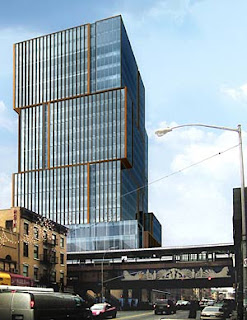 It has been reported in today's New York Times and various media sources that Major League Baseball is making a play for the yet to be approved Harlem Park office tower at Park Avenue and 125th Street. The 21 Story, 630,000 square foot tower would be Harlem's first Class A office building in more than 30 years. MLB would take about 1/5th of the proposed space. Vornado, the developer, is also negotiating with Inner City Broadcasting in hopes to move them from Midtown. The structure, about 40 feet above zoning restrictions, would require city approval of an exception to propsed zoning changes to the area. This is the 2nd attempt to develope this parcel which is currently a vacant lot. Mayor Bloomberg and then-Governor Pataki broke ground on the space 3 years ago on what was supposed to be a hotel, but that deal eventually collapsed.
So long as community impact of the retail space is strongly considered, approval of this plan should be a no-brainer. The parcel, which is directly along the Metro North tracks, has been hard to develope, and for years has been home to various people peddling used clothing, books, etc. on the street. A Class A office building would be a tremendous improvement.
An Office Tower To Rise In Harlem For Baseball TV Network (NY Times)
Vornado's Harlem Park Insanity Revealed (Curbed)
Email Post