211 Elizabeth: In Harmony And In Style 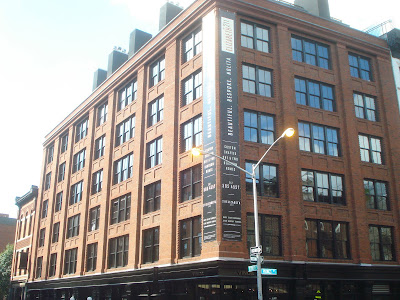 It is not often that I am totally floored by a new condo project, but 211 Elizabeth did just that.
From the outside, on the corner of Elizabeth and Prince, the red brick building looks like it belongs. The scale matches the neighborhood and so does the aesthetic. It looks like it is a century old. That is the idea, but it is barely 2 years old. What is probably even more stunning is that the project is the brainchild of first time developer, Peter Manning. Manning, who has a theatrical background has taken his love for prewar to the next level.
I had the opportunity to tour 211 with Peter and as he put it he was "sweating the details" all the way through. On the initial purchase of the site, he had to work with a quirky seller, but "it was worth it" and he "had to have it, so nobody else would (expletive) it up". Peter's love for the project is palpable, and sweat the details he did. With the help of architect Roman& Williams, and inspired by the Candela Era, everything had to be just right, from the exterior bricks (many recycled) to the walnut floors, think and ample moldings, high ceilings, dimensions, and as he pointed out the "reveal" of the windows of 7 inches. He said such a reveal cost valuable square footage, but that was the cost of doing it right. One of my favorite aspects of the apartments were the over sized wood windows with sitable sills. Wood windows? Wow is this guy meticulous! The result of all his efforts is the best new development I have seen in years, and a developer whose future efforts I would endorse and anticipate with eagerness. Peter's goal was to "honor the neighborhood", that was clearly accomplished, now we only need him to honor more!
Email Post
Labels: Soho/Tribeca South of 34th