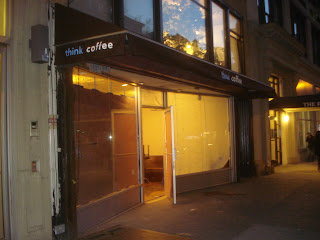 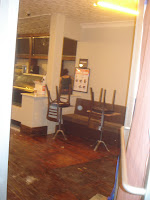 Saw the awning going up last night on Fourth Ave between 12th and 13th Streets. Think Coffee, which many claim to be the best in the city, is coming to Union Square, and according to someone inside the store, could open by Thursday. While I haven't tried Think yet, I am excited by the prospect of more good coffee options near my office. My personal favorite is "Joe The Art Of Coffee" on 13th between Fifth and University which makes a great cup of java, an ass-kicking americano, and tasty homemade lemonade in season. Think's new location is pretty large, I would guesstimate at least 1600 sf or larger, with ample seating. The way Starbucks packs them in on the east and west side of the square, it would be no surprise if Think is a hit. Welcome to the neighborhood!
Email Post
Labels: Union Square