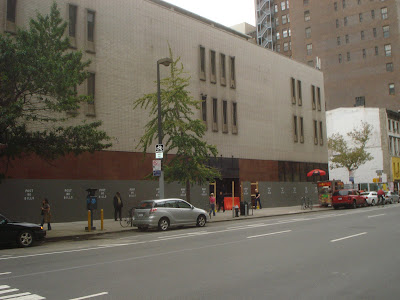 What a long, strange trip it has been for 65 Fifth Avenue. The death march for the hideous building has been slow but deliberate. The virtually windowless drab slab, scene of a student occupation last year, and focus of much community debate, it seems, will not make it to its 60th birthday. Thank goodness! It has taken 5 years and one major downsizing (from a potential 35 stories to the floor equivalent of 10) for the boards to go up and the preparation for demolition to begin. According to New School spokesperson, Jane Croty, asbestos abatement should start by the end of the month and the eyesore of the village should be down by spring. The plan? It will be an "as of right" project with dorms on the top, labs, classrooms, library and auditorium. It also has ambitions of being green. The building will be designed by Skidmore, Owings, and Merrill, but precious renderings will not be out til December by which time more bureaucratic hurdles with the board of trustees will be cleared.
Regardless of what replaces the soot colored box, it is nearly impossible to imagine it not being an improvement.
To follow the progress of 65 Fifth, check: University Center Update.
Email Post
Labels: Union Square