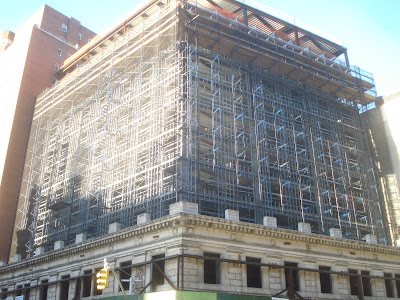 Back in January, I ran a story about the new McSam hotel rising on 13th Street and Fourth Avenue, and highlighted how those at the adjacent building were suddenly, and deeply regretting those lot line windows. Well, although they may be in the dark now, it would be a pretty good bet that those folks are the ones exacting revenge by stalling the project at every pass. The future hotel, that is creatively reusing the century old facade of the former building on site, has been stalled, frozen, since June. A "Partial Stop Work" order continues on the site, preventing any work from being done above the 7th floor. Presumably, the order is the result of a controversy over the height of the building which began with a complaint by a "caller" in June that the building was exceeding its legal height. Whether or not there is merit to the complaint, it is not the only one. Since early 2007, there have been 31 complaints lodged with the DOB, 22 this year alone.
Most of the complaints are coming from a caller or callers complaining about work being done while a Stop Work Order (or partial now) exists on the property. I walk by the property on the way to work every day- believe me- it had been dead since June.While they are keeping the DOB inspectors busy, most complaints have been found to warrant no violation. For the "King of New York Hotels", these folks are proving to be a royal pain! Think it might be one of those lot-liners? Oh, maybe.
Email Post
Labels: Union Square