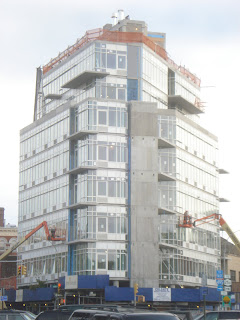 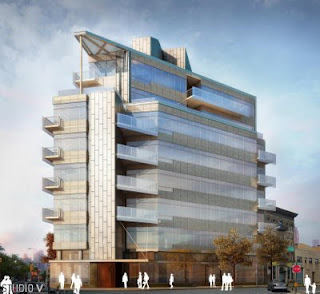 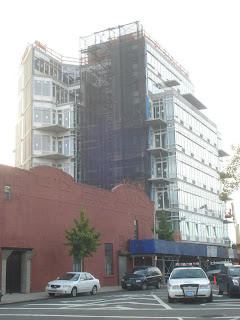 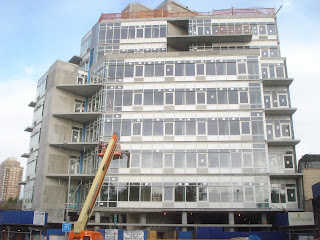 
Inspired by my friends over at Curbed, I figured I throw a few pics out there of another new development in LIC, 10-17 Jackson on the corner of Vernon and Jackson. The blog has gotten plenty of search action on the building, so it might as well be time for an update. You may remember the killer renderings I posted back in January. Well, I have been promised more and am anxiously awaiting them. You see, what appears to be a nearly complete facade, is only half skinned, or virtually naked. According to my friends over at Studio V (the architect), there is a second "lacy, perforated, translucent" layer yet to be added. It comes from Europe and probably hasn't been seen in the states yet. So, the jury is still out as far as I am concerned. I'll post the new renderings as soon as I get them. The building is expected to be completed by the end of the year when they will begin marketing. It is full steam ahead with sales as I am told the builder, architect and marketing team are in agreement that they have a compelling product. Love the high ceilings (11'), and those renderings. If renderings (at least the old ones) match reality and the floor plans are generous, we may have a winner here. Worst case, atop the Vernon-Jackson 7 train stop, this wins the prize as the new development that is closest to Manhattan by train.
I promise, more soon!
Email Post
Labels: Long Island City