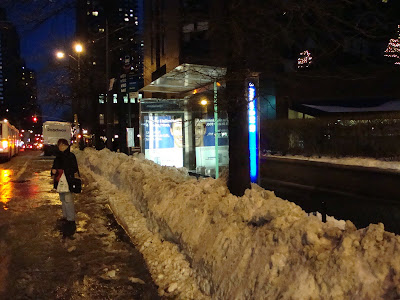 There was a little luck involved, with relatively warm streets and major accumulations late on a Saturday night with ample warning, but, the response by the Department of Sanitation was mixed at best. With 11 inches reported in Central Park, sanitation had a tall task, and it was clear that the plows were on the street in numbers and early, but their actions sometimes left people scratching their heads. Sunday afternoon, for instance, East 57th Street was plowed westbound, but not eastbound. I was on a bus to an open house and it was clear that the driver was extremely challenged. The plows did a great job on Third Avenue in the 90's, but expediency clearly took priority over rational thinking. Between 91st and 92nd Street, a bus stop was fully plowed in (a pile 3'-4' tall), and there was no gap in the snow for over a block. The result that passengers, many seniors, were forced to disembark in the second lane of traffic and were forced to walk in the street with slush icing over for quite a distance. It was equally challenging catching one of Third Ave buses as, if it were just arriving when you were, you would have the choice of hurdling the snow bank or running a block to access the street and then running back a block in traffic. I spoke with a couple of riders who where aghast with the situation. "Unbelievable" commented one ride, "idiots" decried another. Such a situation makes you thankful for being young-ish and able-bodied- seeing an elderly man exiting a bus with the help of a well worn cane made me cringe.
The other major problem was corner crosswalks. While it was clear that many merchants and building workers diligently cleared corners, others remained completely untouched. So, on some blocks it was clear sailing and others required an unstable climb or slush in your boots. My understanding, I could be wrong, is that building owners and/or merchants are responsible for clearing the corners. If this is the case, enforcement was asleep on the job.
In short, most major thoroughfares were cleared efficiently, but there is room for major improvement in planning.
Email Post
Labels: FiDi/BPC