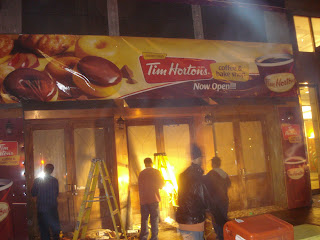 This strikes me as a disappointment, and a pretty big one. On the site of what was the massive and tasty vegetarian "Zen Palate" (16th and Park), I spotted signage and crews working feverishly to complete a Tim Horton's Doughnuts (yes, they spell it differently up there). Now, don't get me wrong- everyone needs a good donut every millennium or two, but this is a downgrade and really counter to where we would like Union Square to be going. Also, unless Horton's is paying an exorbitant rent, doubtful in this market, the landlord is painting himself into a corner by giving up prime frontage unless he has made a deal for the rest of the space.

Update (thanks to my friend Joey over at Curbed): Turns out that Riese Organization, the fast-ish food giant, bought the former Zen Palate building, and initial plans call for not only a Tim Horton's, but possibly a TGI Fridays on the spot as well. Note to self, the burbs are invading, the burbs are invading! Ouch!
TGI Fridays And Tim Horton Come To Union Square (NY Serious Eats 8/17/09)
Email Post
Labels: Union Square