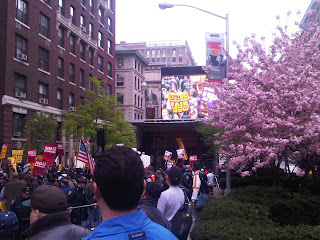 A rowdy, surreal, and festive atmosphere was evident on ritzy Park Avenue this evening as thousands of building workers marched and rallied to 83rd street and Park Avenue. Helicopters whirled overhead as spontaneous chants broke out and workers mobbed any available tv camera to plea their case. Soul music was blaring in the streets in front of New York City's most expensive prewar coops. For an hour or two at least, thousands of the 30,000 plus strong union owned Park Avenue. Folks were fired up and as one worker, Miguel told me, "a strike is 90 percent". That echoed the sentiments of many in the crowd and if they are right, the elite of Park (and many not so elite) around the city will be handling their own trash and own doors in just a week.
Sent via BlackBerry by AT&T
Email Post
Labels: Upper East Side