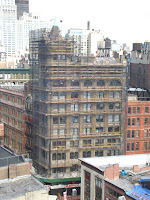 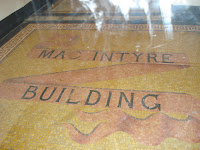 This 1892, 12 story classic on the Northeast corner of 18th Street and Broadway has long been a favorite. For me, it has always been the amount of window area for the size of the building and the fact that irt was where I saw one of my first great lofts for rent back in 1990. For others it is that elaborate mix of Byzantine Columns, Romanesque Arches, and Gothic finials combined by architect, Robert H. Robertson.
Funniest about the building is that it was built for Ewen McIntyre (a well regarded druggist at the time), but it is called the MacIntyre Building due to a colossal typo in the tile mosaic just inside front hallway. Imagine his reaction when he saw that f*#k-up! Mr. McIntyre never lived in the building which were rented out as offices, then home to many in the china and textile business in the 30's, and eventually bought and co-op'd in the 70's by a group largely made up of artists and others in the creative fields. One of the first tenants paid $17,000. for an entire floor. It is no wonder then that the cash was available for a recent renovation which included a painstaking replacement of it's still wooden windows, and a complete refacing. The building is now restored to it's original grandeur, and the veil is about to be lifted on this New York beauty.
Email Post
Labels: Union Square