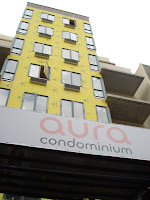 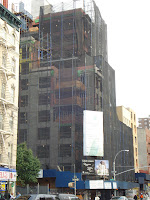 ( The Aura..............The Observatory)
LeHa, it's a new name for the area of Harlem South of 116th and East of Park. Why the new name? Well, if you've seen the condo boom that is bubbling in this area, it is quickly beginning to look like a whole new neighborhood. Vast and numerous lots are under construction in the area and it seems as if you cannot walk a block nowadays where there is not at least One condo on the rise. I was long skeptical of the area, but no longer. Take as evidence The Aura Condominium on East 109th Street between 1st and 2nd Avenues. The Aura opened 2 weeks ago with average prices over $700 per square foot, 2 weeks later 16 of the 28 units are in contract. Simply put, this building is on fire! It would only stand to reason that The Observatory Condominium on 103rd and 1st Ave at $670 per square foot, with views and a doorman (unlike Aura) will also be a hit. In fact, if you search the databases, you will find that the area has sold very well over the past year with offerings like The Ivy, The Nina, Casa Brava, and Park Hill East, and prices have climbed by at least $100 per square foot in that time frame. The neighborhood does have alot to offer. For one, it's in Manhattan and with good mass transit, it is a fairly easy bus or train to Midtown and Harlem's future commercial core up on 125th. Second, shopping is improving daily. Aside from some serious Italian food on First and Pleasant Aves (home to the original Little Italy), Home Depot, Target and others are building off of the FDR drive at 116th Street (home to the former Washburn Wire factory which was long abandoned). The area is largely residential and has alot of the old New York charm in the form of townhouses and tenement structures that have stood for a century or longer. Even with the recent appreciation in prices, you are still paying up to 50% less for the same thing less than a mile to the South.
Email Post