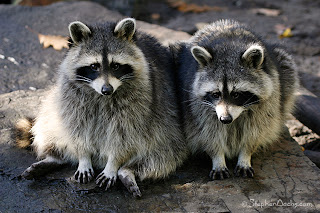 Raccoons are roaming the streets and tormenting Hunters Point residents. One has even tested positive for rabies after being caught near a local school according to a Hunters Point resident (unconfirmed). This report could not be verified through the City's Animal Care and Control office. The office did confirm that Raccoon sightings in LIC were on the rise as they have been all over the city. Apparently the problem area is primarily from 2nd Street to Vernon Blvd between 50th Avenue on The South to the Anabel Basin in the North. The city will not come out and capture a Raccoon unless it appears bewildered, confused and suspected of carrying rabies. Be on the lookout LIC, according to the city skunks and possums are also on the rise.
Email Post
Labels: Unusual