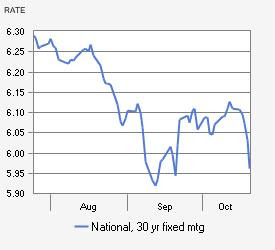 Since the height of the spike in rates in early September, interest rates on conventional and jumbo 30 year fixed rate mortgages have continued a downward trend making owning a home far easier than just 7 weeks ago. The 30 year conventional rate has dipped back below 6%, and more significantly, the 30 year fixed rate jumbo is back down to under 6.625%. Remember, just 7 weeks ago, several large institutions had upped jumbo rates as high as 8% and beyond, so recent movement is both significant and indicative of a stabilizing mortgage market. As I discussed back on September 7th, risk premiums, not real rates had jumped. I consider "risk premium" as the difference between the 10 year treasury yield and the 30 year jumbo rate. Prior to the peak of the crunch, the risk premium was 1.5%. It jumped to 2.6% on average at the peak of the crunch (early-September), and it is now down to 2.25%.
The outlook for rates is still very bullish for the New York Market. Two dynamics are at work. First, real rates continue to trend down. Considering the weak national economy and a federal reserve inclined to cut rates further, this trend seems established and likely to continue. Second, as lenders are taking a more conservative approach, the "risk premium" continues to shrink. Ideally, it would shrink back to 1.5%, which would bring jumbo rates under 6% and conventional mortgages below 5.5%. While this is unlikely to happen entirely overnight, the aggregate of these trends would lead one to believe that at a minimum rates are moving in the right direction.
Lower rates mean a more affordable mortgage, and the ability to afford a higher priced apartment. The current market may still have obstacles in front of it, but fortunately, one of the biggest, interest rates, will be a friend and not a foe over the near term. Of course, the weak dollar continues to be another major positive, and considering the interest rate picture, the cheap dollar will also continue to be a positive contributing factor to the stability and growth of the New York real estate market.
Email Post
Labels: Economy