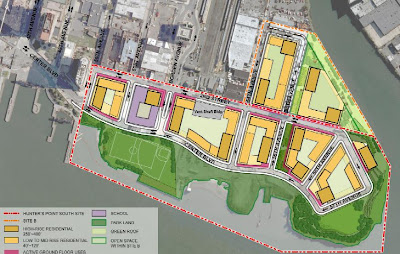 The former Olympic Village, known as Queens West South has been renamed Hunters Point South. The announcement and greater detail on the "affordable" housing project were divulged last night at a meeting between local residents and The NYC Economic Development Corporation last night. The meeting was less contentious than one might expect from such an affair with many locals praising the city's attention to community concerns, while few still had major unresolved issues. Highlights of the city's most recent plan:
1- Up to 5000 housing units will be built on the 30 acre site with 60% going to middle income residents (defined as a family of 4 with income of $50,000 to $145,000). The units will be primarily rentals run by a non-profit comprised of several developers.
2- Rents would be set at 30% of the renter's income (ex: $50k income=$1250/mo. rent).
3- The site plan calls for 4-7 story low rise buildings along 2nd Street, and Six 28-40 story buildings closer to the water.
4- 10 acres, primarily on the coast and flood plain will be reserved for park space. Additionally, all streets will have continuous tree pits to seamlessly merge towards the park space. Sidewalks on the extension of Center Blvd will be a pedestrian friendly 15' wide.
5- The existing street grid will be extended into the project to preserve site lines and views.
6- A 150,000 sf school will be built to service grades 6-12.
7- Parking for 2000 vehicles will be ground level and "wrapped" by large buildings.
8- The project's cost is estimated at around $300 Million. The cost will include funding of a library that should have already been built and has been promised time and again according to local residents.
9- A dedicated bike bath will circle the project.
10- Existing topography, namely the hill at the South end will be preserved (the hill is 30' above sea level.
11- Aside from possible extension of existing bus routes or establishment of new ones, the city has no real plan to ease crowding at the Vernon/Jackson 7 train station.
12- The privately owned 7.5 acre parcel now occupied by the Budweiser plant due East of Hunters Point South on the Newtown Creek is integrated into the overall infrastructure plan and may include contiguous park space along the creek. A buyer for that parcel has not yet surfaced and the city has no plans to acquire it. The lots is being marketed aggressively according to the city and could contain another 1500 free market rentals or condos.
Issues and concerns
1- With limited park space, a local resident pointed out that the plan had one or two too many high rise structures for the size of the lot. Hunters Point is in dire need of park and recreational space, and the city may be blowing a major opportunity to provide it. The resident had a great point, and if you look at the site plan the last square block on the South end would provide a spectacular setting for additional green space.
2- Where is the library already? That's what residents want to know and an issue that the city had no real clear answer on. Apparently the funds have been dedicated, but the land has not been purchased. City action on this issue would go a long way with local residents.
3- Why does affordable housing have to be rental housing? The president of Citylights made a very good point about how home ownership adds a greater deal of stability to the neighborhood. The City had no specific answers on the percentage of units that would be available for sale, but it was clear that their intentions are largely for rental housing. The overwhelming majority of those attending the meeting disagreed and every time a case was made for coops or condos on the site the crowd broke out into applause. Pride of ownership goes a long way in the building of a community, and enriches the middle class rather than promoting subsistence. Community requests for low income senior and artist's housing could also be addressed through ownership. The City should clearly revisit this issue.
In summary, The City appears to be doing a great job of reaching out to the community and a decent job of actually listening. The City has a monumental opportunity to make Hunters Point South a truly great community. A little less density and more attention to community facilities would likely do the trick.
NYC EDC Plan For Hunters Point South (NYCEDC.com)
Email Post
Labels: Long Island City