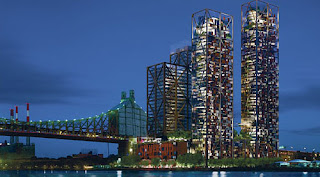 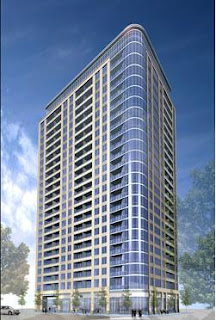 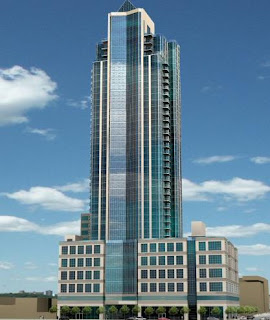 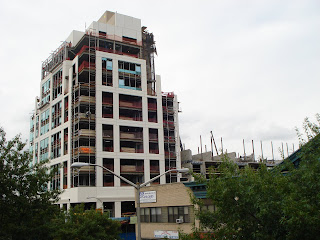 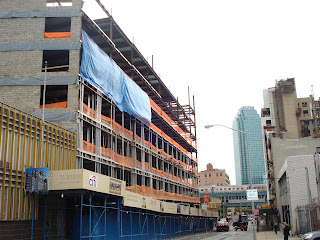 
The boom is officially on in the once neglected, yet incredibly convenient, Queens Plaza/ Long Island City North area one subway stop from 59th and Lex. The skyline, now just noticeably changing, will be unrecognizable by 2010. Up and Down Queens Boulevard and 2 blocks North and South from the East River to Jackson Avenue everything is changing, and the sky is clearly not the limit. Among the many projects in the area:
1- Queens Plaza Makeover- $28 Million dollars of Federal and City money has been dedicated to making the plaza park like and pedestrian friendly. The project is due to break ground imminently and will include a 1.5 acre park where a parking lot exists at the intersection of Jackson and Queens Boulevard.
2- The Fusion Condo- It's officially open and people are happily moving into the luxury condo at Hunter and Orchard. Prices for the remaining 5 units, fully decked out with Viking Kitchen and Spa baths start just under $700/ft..
3- View 59 Condo- At the foot of the 59th Street Bridge and Crescent Street, this 35 unit lux condo has a few units left starting in the mid-$600's per square foot and begin move-ins in early 2008.
4- Crescent Club Condo- I got a sneak peak at this gem yesterday. This Karl Fischer/Andres Escobar effort has virtually every amenity imaginable including 69' outdoor lap pool. Initial pricing (likely to be amended up soon) is just under $600psf. Crescent Club is across the street from View 59 on Crescent Street.
5- Unnamed rental building- Just North of View 59 and West of Crescent Club. Not much info on this one, it is about 10 stories and still growing. It looks like all units will have terraces and should be finished in 2008.
6- Queens Plaza Condo- Just North of Crescent Club, already open, this condo was first in this area, prices were around $600 psf.
7- Silver Cup West Project- On the South Side of the Bridge on the East River, this mammoth $1 Billion, 2.7 Million SF mixed use project winding it way through approvals. It will consist of 3 Towers ranging from 40-60 stories, will include 1000 condo apartments, office and retail space, as well as 8 new sound stages. If my numbers are off by a bit, forgive me, as there has not been much news on this project in the past year. Completion was originally scheduled for 2010.
8- Tishman Tower Site- On Jackson and Queens Plaza, currently the site of the biggest eyesore in the area, the municipal parking garage, Tishman is expected to erect a 40 story, "Class A" office building.
9- Star Tower- Demolition is to start soon on the former home of the Long Island Star Newspaper across Hunter Street from Fusion and the future Tishman Tower. This ultra-lux condo by the Roe Corporation will rise 25 stories and should begin marketing in early 2008.
10- "Queens Plaza", a 500,000 sf, 39 story hotel/condo combination just West of View 59 on Queens Plaza North. This Karl Fischer effort has broken ground and bears a faint resemblance to The Chrysler Building.
I'm sure that I haven't covered it all, and there are some attractive development parcels on the market that have not yet been spoken for, so, I assume that there is a lot more to come. If you have interest in buying a condo or development site in the area, as usual feel free to contact me, and stay tuned for updates.
Email Post
Labels: Long Island City