The Subway Riders' Bill Of Rights, A No Brainer! 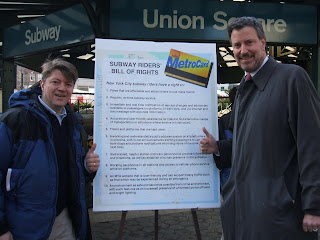 City Council members Bill de Blasio and John Liu held a press conference today in Union Square, on the eve of another MTA fair hike, to demand accountability from the MTA. While the fare hike is inevitable due to support from both Spitzer and Bloomberg, de Blasio argues that at a minimum, subway riders should be entitled to several basic rights. They include regular, on-time service, clean, well-kept and well-lit platforms, and real-time notification of service changes and delays. De Blasio points out that we use the largest mass transit system in the Western Hemisphere, but we are far from the best, especially when it comes to keeping New Yorkers informed and utilizing existing technology to do so. While commuters in New Jersey and DC have service changes and alternatives text messaged in real time, New York has yet to even address its P.A. system, which is the butt of jokes on "Saturday Night Live". As the notorious rain storm of August 8th revealed, we have no reliable communication with the masses. Heaven forbid, if there were a terror attack on our transit system, we are completely unprepared, and the cost could come in the form of human lives. I might add that the current fare hike -- which really singles out daily users (the working man) -- is regressive and is diametrically opposed to the goals of congestion pricing. De Blasio and Liu are right; at a minimum, subway riders deserve some form of accountability, and the subway riders bill of rights is a good start.
Councilmen Propose Subway Bill Of Rights (WABC)
Email Post