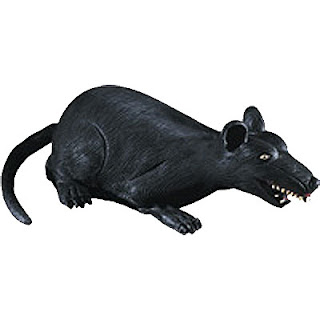 Chalk this one up as a first in my New York experience.

I was walking into the 86th Street station at 8:45ish this morning to get on the 4/5 train to Union Square. Just as I had turned left after passing through the turnstile to head to the stairs, nobody was moving. Suddenly, from the stairs a large rat had finished his climb and darted past me causing me to jump over the nasty vermin. The rat, which looked to be around a foot long and chubby, continued at high speed southbound on the downtown 6 platform. For me, that' s where it ended. That is, until, I just read Gawker.com, and as it turns out the rat actually jumped onto a downtown 6 train just as the doors were closing. Let me tell you, there were signal problems and the trains were slower and even more packed than usual. What a hell ride that must have been!
Full Gawker Story:
Todays Trend: Rats (Gawker)
Email Post
Labels: Upper East Side