"U Don't Know Nothing Produce" Tells East Siders How It Is 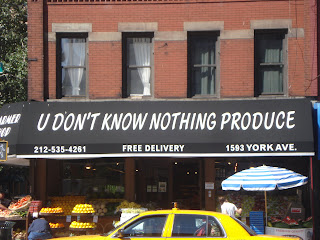 How do you really feel? This market owner is letting it all hang out. I spotted this on 84th and York Avenue yesterday. Apparently, the shop owner knows something, as the shop was well stocked with attractive produce at good prices and was pretty busy.

Update: Apparently the joke was on the owner, who hails from the Black Sea region of Turkey. According to the person I spoke to at the market, the name was lost in translation. Somehow, he believed that it was something positive that he was saying. The example the worker gave me is a phrase like "not bad", a double negative that means something good. Only in New York!
Email Post
Labels: Upper East Side