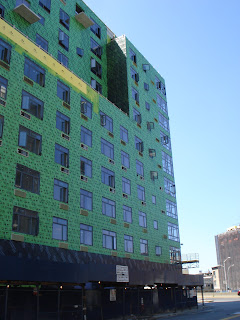 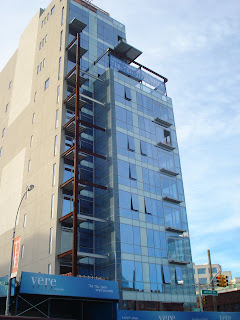 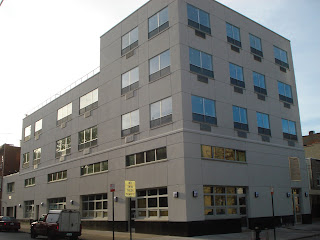 There is a crop of new condos coming on the market in the coming weeks: Vere on Jackson and Purves (just north of Court Sq.), L Haus on Jackson and 49th Avenue, and Prestige Condo on 50th and 5th Street. These will be among the last of the condos put in the ground in the race to get a 421-a tax abatement. Given the softness in the market of late, these projects will be a real barometer for neighbors and those who have bought recently.

I took a tour of L Haus recently and the place looked very nice. Despite a somewhat challenged location off the Pulaski Bridge, the finishes were high quality, and the amenities including 10,800sf yard, yoga studio, gym, lounge and roof deck were an exceptional potential draw. Also promising is the Cetra/Ruddy (of One Madison Park) design which is far from cookie cutter. L Haus is also priced reasonably with some units as low as $600ish per square foot.

Vere further up on Jackson on the corner of Purves Street is priced a bit higher per square foot averaging around $785 per square foot (for the 17 units listed on StreetEasy). While I won't preview this property until Thursday, it seems that the sell with this building will be the Andres Escobar designed interiors, ceiling heights of up to 13 feet and views. I'll report back on this one soon.

Finally, a real mystery, first mentioned by my friend over at LIQ City. The building called "The Prestige" is a lofty boutique condo on 50th Avenue and 5th Street. Originally, it is rumored that the building was shooting for LEED Gold certification and called the "Greenview". I am not sure if the change of name indicates that they have abandoned the Green concept. While the exterior looks pretty ordinary, the interiors look pretty nice from the limited pictures that I saw on Flikr. Prices are reported to be in the $700's per square foot (not confirmed).

I've been out to LIC quite a bit recently and from the looks of weekend traffic as well as empirical evidence things seem to have really picked up since labor day. These three new condos all open in the next month and will be a good litmus test for demand, type, and price of condo to move in LIC going forward.

Personally, I think value is the big driver to LIC. Which condos sell and how fast will be a good indicator.
Email Post
Labels: Long Island City