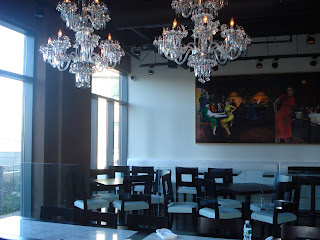 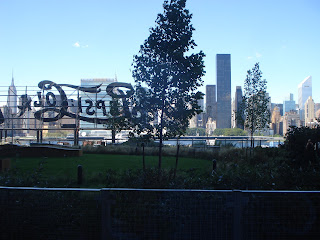 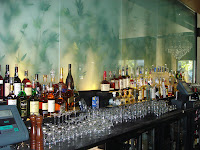 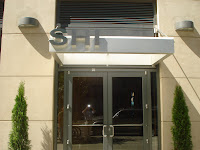 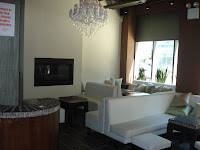 LIC is about to feel culture shock! As much as I love LIC, it is very rare if ever that I actually felt truly hip being there. That is until today.
"Shi" an Asian fusion restaurant, bar, lounge opens tonight at the ground level of Rockrose's East Coast 1 building on Center Boulevard. After interviewing one of the three owners today, I asked Shih Lee, if "sexy, fun" would more or less sum up the atmosphere he was shooting for in the new eatery. He agreed and believe that "sexy, fun" summed it up.
"Shi" has a little of everything. It's menu is primarily Chinese influenced with some American and Japanese twists, as well as Shi puts it "a kick ass sushi-bar". The interior reflects a wide-range of Asian influences with fantastic river and skyline views, and takes advantage of an outdoor seating area in the back to soak in those views on temperate evenings. In addition to a large and comfortable dining area, the restaurant has a well designed large bar area, as well as a very inviting front lounge with fireplace. To keep in the spirit of fun, there is even a dj booth above the lounge area. The idea, says Shi is that after dinner, the music starts to kick in, and those who have enjoyed a nice dinner are tempted to stay for a nightcap.
I sampled some of the food, and I have to say, to my palate at least, it was quite tasty and would no doubt compete with the best high end in the city. And, the prices are quite reasonable.
I smell a hit here- not just for LIC folk, but I picture people coming to LIC for some sexy fun at Shi. Opens Tonight.
Email Post
Labels: Long Island City