Union Square Gets Even Greener, Safer Too 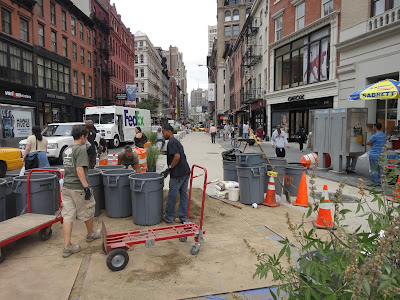 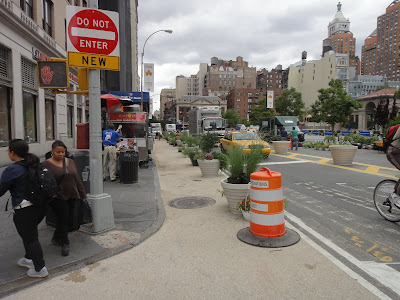 They may not have gotten rid of the junkies that occupy the southeast corner of the park, nor the occasionally violent students, but crossing the street on the northwest corner has gotten much safer. Traffic east on 17th from Union Square West to Park Avenue has been eliminated and is currently being replaced by planters, a bike lane, and more of that tar/beige gravel that is becoming so popular along Broadway. Now, many have mixed emotions about all the pedestrian-ification (yeah, I know that's not a real word) of Broadway, but this particular move makes plenty of sense. I am not sure how many if any pedestrians have been killed crossing that corner, but I have seen more than my share of close calls (95 injuries have been reported on Broadway between 23rd and 17th between 2004 and 2008).
Union Square is also getting greener! Just when you thought the new north plaza with 21 new and healthy Japanese Pagoda trees was nice, now more plants, shrubs, and trees are being added in dozens of planters which will now occupy the south portion of 17th Street where car roamed just days ago. It may look a little odd right now, but I am sure we will get used to it.
More:
Broadway Union Square Pedestrian Improvements Warning-PDF (NYC DOT via Union Square Partnership)
Pedestrian Plaza Is Planned For Union Square (NY Times 4/2010)
Email Post
Labels: Union Square