From Shea Rubble Rises "Citifield", But Why Don't We Call It "New Shea"? 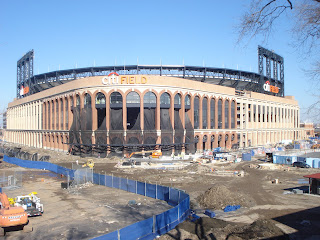 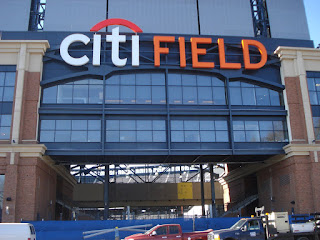 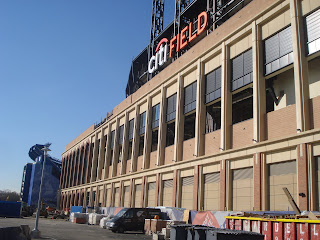 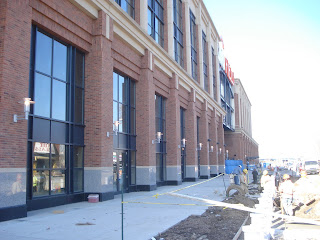 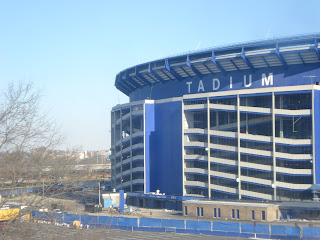 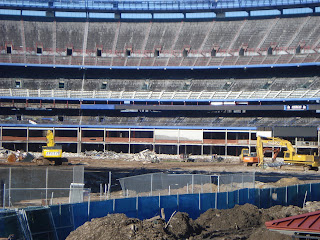 I had a couple of reasons for heading out to Shea Stadium and the new "Citifield" this morning. First, I was lost for blogging ideas, so I hoped on the 6 train and figured I'd just play it by ear. Then, I decided that perhaps I jump out at Grand Central and hop the 7 to LIC. Before reaching Grand Central I started reading George Vecsey's article in today's NY Times sports section decrying the continued presence of Citigroup's tarnished name above the majestic new stadium. Having wanted to blog on this issue last week and being unable to find any real good pics online, the decision became a natural.

It was a familiar sight, pulling up on Shea via the 7 train and seeing the Stadium rise in the distance. In this case, they must have sold the "Shea" and the "S" for stadium as it only reads "TADIUM" right now. There was a twinge of sadness. From the time of my childhood during the 70's, the arrival was a familiar and anticipated event. Things are different, times change, and I am certain to get over the loss, as the reality is, Shea was a dump. It held memories, tons of them, and my favorite seat in sports, the loge boxes just inside the foul pole in right field. They were somewhat underrated seats- they were cheap, almost always available, they had a decent overview of the field and there was always the exciting prospect of catching a home run. But, that too can be replaced- I can find a new favorite spot in the new stadium, although not as cheap, for sure.

As much as the carnage of the familiar stadium was depressing, the glory of the Mets future home is filled with hope and promise. My first reaction was that Robert A.M. Stern must have gone into the stadium building business. The structure looks like a blend of Stern's The Harrison, The Brompton, and the intelligently retro-designed Camden Yards. From the exterior, at least, this looks like a world class stadium befitting of the great city that we are. There is only one thing wrong- Citi.

Much has been made of late of the $400 Million Dollars being paid over the next 20 years for naming rights in light of $45 Billion taxpayer dollars being paid to Citigroup to keep it afloat, not to mention the over $300 Billion in guarantees, again courtesy of the taxpaying public. I think the public has every right to be outraged. Whether it's a bonus or a stadium name, it is now coming out of our pockets. Besides, "Citi"is now synonymous with collapse and failure. As Vescey points out, the way the past two Septembers played out, the Mets can tell you about collapse and failure. A new stadium is a chance for a new beginning, new hope, a new legacy to be built. I think it's time that the Mets and Citi throw out the agreement. The Mets should either find a new sponsor, or better yet, continue to pay tribute to William Shea, the lawyer who realized his dream to bring National League baseball back to New York. Now that's a legacy that we can all live with. Besides, the taxpayer will not only save $400 Million, but the MTA would save on all the signs that would have to be changed. Rumor has it, they could use a little help too.
Email Post
Labels: General