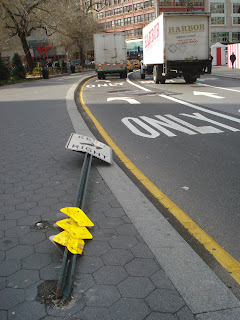 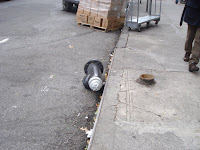 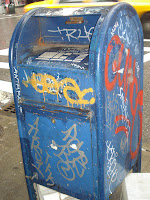 For those of you who pine for the old, gritty New York, 2009 may be your year. While the massive city budget cuts have yet to even kick in, signs of urban blight are clearly on the rise. Graffiti appears to be on the rise as more retail remains vacant and unkempt. Subway service is clearly tanking, and basic maintenance on things like street signs and fire hydrants also appear to be lagging. While recent crime stats are mixed, murders were actually up by 5% in 2008, bucking an 18 year trend.

What will 2009 have in store? A solid guess would be a continuation of the trend.
Update 12/26/08: The hydrant has been re-affixed to it's base.
Email Post
Labels: General