Under Covered Story Of The Year: The Dreier Fraud 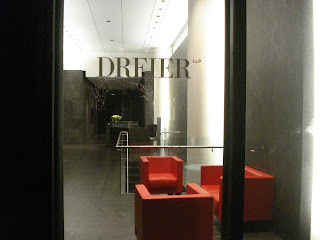 If it wasn't for Bernie Madoff, Marc Dreier surely would have been the fraud of the year. While his tally of theft pales in comparison, at only $380 Million, this rich, brash, Real Estate lawyer could easily compete with Madoff in terms of sheer audacity and... let's just call it chutzpah. Not only was Dreier selling fake promissory notes purporting to be those of Solow Realty, he was on occasion doing it right from Sheldon Solow's own offices. As a trusted lawyer for Solow, he would show up unannounced and take up residence in one of the real estate titan's conference rooms and sell the fictitious notes right there. In other situations he would impersonate other lawyers to get the deals closed. In the end, it was a receptionist that did him in. Apparently, one of the people he was impersonating just happened to show up to an office shortly after him. The receptionist saved the Ontario Teachers’ Pension Plan $33 Million.

The whereabouts of the millions is unknown, but the carnage is pretty clear. At least a dozen hedge funds and pension funds were scammed to the tune of $380 Million, $35 Million that was held in escrow is missing, and 250 lawyers are scrambling for work. It was a well regarded successful firm by all accounts, but in the end Dreier had not paid rent, funded the health care plan of the company, or even paid the liability insurance for the firm.

This is easily the most under covered story of the year. I hope to see a couple of stories by the likes of The New Yorker, Vanity Fair, or NY Times Magazine that really dig into it. While Madoff's madness was indeed the scam of the century, I think the Dreier debacle would make a better movie.
Lawyer Seen As Good Enough To Cheat The Best (NY Times)
Chutzpah Spree By Lawyer Nets $380 Million (Bloomberg)
Email Post
Labels: Tabloid