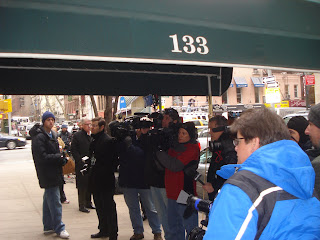 Out of curiosity I stopped by 133 east 64th Street, the home of Bernard Madoff, the swindler of the century. It was quite a scene. At least a couple dozen cameramen and photographers were staked out 4 feet from the front door. There were brief frenzies as it was rumored that Madoff would be coming out. A helicopter briefly roared overhead. A reporter stood on the CNBC truck giving reports. Cameras flashed at every false alarm. This morning at least, Madoff never left his house. A couple of police came and went as well as a couple of very FBI-looking suits. But, no Bernie.

I can only wonder what it would be like to live in the building with the media camped out, from the non-curfew hours of 9 am til 7 pm. Most of the residents were jovial and joking. There were of course a couple of people who acted as if you were dealing them some incredible inconvenience for which they should never have to be subjected. The nerve of those people freezing their asses off for piddly wages covering the greatest Ponzi scheme in modern history.

You also ponder what it would be like to have that same swindler as your coop board president. Hopefully, the board president had nothing to do with investing the reserve fund.
Email Post
Labels: Tabloid