Jersey Shore Meets The LIRR, As Drunks Are Segregated And Locked Up On LIRR Train 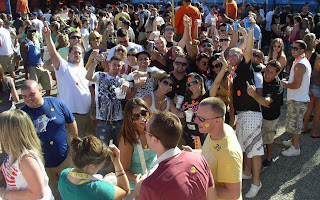 "Believe me, you will be thankful come Hampton Bays" answered the LIRR ticket taker when asked why the first two cars of the late Montauk-to-Jamaica train were locked and inaccessible to all stops prior to Hampton Bays. And man, was she right!
Prior to arriving in Hampton Bays, the conductor announced the first two cars of the train would be opening first, to accommodate a "special party". After the special "guests" had boarded, the remaining doors would open for passengers entering and leaving the train.
What was the controversy? What was this "special party" to board at Hampton Bays? Upon further inquiry, the engineers, conductor, and even a burly, plain-clothed LIRR employee (de facto bouncer, perhaps?) were more than willing to share. Hampton Bays is home to the "Boardy Barn", a legendary bar which caters to people barely of drinking age whose sole aim is to get drunk to excess. The bar is open only on Sundays from Memorial Day to Labor Day from 4:00 pm. to 8:00 pm. The train arrives in Hampton Bays at 8:28 pm -- just in time for the partyers to board. "They are animals" an engineer explained, "the entire train smells like vomit within five minutes". So, of course, I eagerly awaited the spectacle about to ensue.
A few minutes out of Hampton Bays, 5 LIRR employees gathered at the front of the 3rd car, in something that resembled a war footing. It was agreed that the biggest and strongest would defend the perimeter. One "collector" argued that he hadn't finished collecting fares. "You can get to it later, we have bigger issues to deal with right now" barked one who seemed to have either seniority or experience in the situation. As the train rolled up, it sounded as if we were approaching a chanting, singing, screeching mob. There they were: more than 150 obliterated youth that would give Snooki, Vinny, or "The Situation" a run for their money any day! Tank tops, hair gel (for both sexes), muscle flexing, and fist-pumping were the rules. So potentially dangerous were these drunks that they were given a full police escort onto the train and for the ride. Tickets were collected prior to boarding, because collection otherwise would be "impossible". LIRR officials herded the drunks into the first two cars while discreetly telling non-partyers to wait a few minutes. Later they would be admitted to the remaining cars behind the "special cars". The doors were intentionally locked between the second and third cars to make sure that there was no mixing with the revellers and the regular commuting public. The window into the second car was like the glass at a zoo. Seen through it was one of the first patrons who promptly attempted to sit but missed the seat entirely, cheesy, drunken makeout sessions, and of course those afflicted with sickness. On subsequent stops a few normal folk inadvertently boarded the alcohol-apartheid car and were found pressed upon the locked barrier, pleading for mercy like someone desperately in search of the last lifeboat on a sinking ship. A lifeline was granted at each stop by the conductor who would open the door for the sober, while any attempt at movement by the drunkards were thwarted at the door. The 3rd car was like a club for normal people and the conductor was the door man. Those who made it through had looks of relief and disbelief.
The party crowd made mass exits at Patchogue and Babylon; after Babylon, the first two cars were nearly empty. Arriving in Jamaica were only a few who had passed out on the ride, empty Bud Light pint cans and the like -- and naturally, no shortage of vomit. While the actions of LIRR personal may have been unorthodox, from a sane traveller's standpoint, their actions were borderline heroic. And yes, the ticket collector was right; I was indeed thankful!
(Photo credit: Big Dave's Pics/Picasa)
Email Post
Labels: General Hamptons Unusual