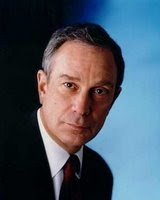 The UPI reported the other day that Mayor Bloomberg was considering asking for a referendum that would change term limits to allow him to run for a 3rd term. Bloomberg's press secretary quickly came out to deny it. Well, I have one message for the Mayor- don't deny it, try it!
While I have been plenty outspoken in my opposition to mayor in many ways- congestion pricing, Queens West South, and the smoking ban (I've since come around on that one), I have also been outspoken about what a terrific job he has done.
First and foremost, the Mayor's financial stewardship over the past seven years has proven him to be one of the best mayors in the history of our city. Handed a huge deficit and innumerable difficulties as a result of 9/11, the mayor has been reasoned, intelligent, responsible, and compassionate in his handling of city finances. In one word, his performance has been brilliant. We, as a city, are facing more economic tough times- a recession, Wall Street layoffs to name just a couple. We can ill afford to have some partisan, long time political hack to take the reins of our city at this critical juncture. This is reason #1 why I implore the Mayor to explore his options for a 3rd term.
Bloomberg is a visionary. OK, some visions I don't like, and many that I did like the Olympics bid and Jets Stadium never lifted off, but the most important thing is to have a big thinker and visionary leading our city. There are so many big projects that have to be seen to conclusion in this city- the 2nd Avenue Subway, Ground Zero, The Fulton Transit Center, and the West Side Yards to name just a few. While in the current climate completing these projects will be difficult, I would argue that they will be virtually impossible without Bloomberg. Not only do I believe with a little luck he can get these jobs done, I am confident in the mayor's ability to provide further vision for the future.
Finally, I have no doubt that the Mayor's heart is in the right place. Yes, he may need a little help in learning to build political coalitions, as is evidenced by his failure to sell passage of Congestion Pricing in Albany, and yes, as a successful manager he is used to calling the shots, but I can't recall any time when I felt like the mayor didn't have everyone's best interests at heart. He is a mayor that is giving philanthropist, takes a $1 annual salary, rides mass transit, and eats at the local hamburger joint. There is a lot to like about Mike.
I would further challenge the mayor. Yes, you've been brilliant economically, but few mayors are remembered for balancing a budget. You've had brilliant vision, too little of which has been implemented. You've been a great mayor, but a 3rd term, overwhelming re-elected by the people, would provide you the opportunity to establish a legacy that will last for generations beyond your service to the city.
Email Post