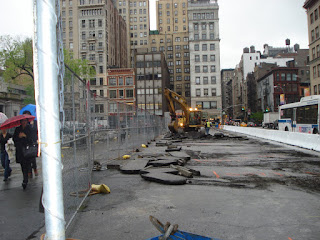 The jackhammers are out and the heavy equipment is rolling in Union Square Park this morning after a NY Supreme Court judge ruled that construction on the Park's renovation can continue- however, a restraining order against knocking down trees and renovating the pavilion has been extended indefinitely. In the short term it is a sensible ruling in that nobody objects to more playground space, or a much needed renovation of the Farmers Market facility that has no more charm than a parking lot. However, the real issue, that of a private restaurant occupying public space in the pavilion remains unresolved. From a strict legal standpoint, it looks likely that such appropriation, or as critics see it, expropriation, would likely have to be approved by the state.
Restaurant Is Stalled At Union Square (NY Sun)
Email Post
Labels: Union Square