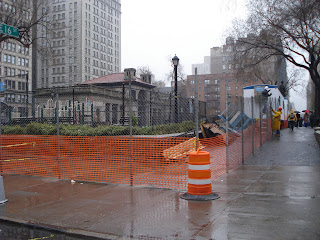 It all started Six years ago when the City Council pledged $1.9 Million dollars to renovate the North end of Union Square Park. There has been controversy, anger, appeasement, and backroom dealings ever since. That was until this week when fencing went up and construction trailers descended on the Park. Today, the Farmers Market was moved to the West side of the park and various construction barriers indicate that something is finally happening on the North end. The construction, which was last reported to begin this fall, has apparently begun. The final plan which will cost $20 Million will include a tripling of the playground space, a greening of the North end of the park and resurfacing of the Farmer's Market area to include electrical and plumbing upgrades for the vendors. The most controversial aspect is the plan for a 120 seat restaurant which will occupy the badly dilapidated Pavilion built in the 1930's. The Pavilion will be completely renovated and will also include office and maintenance space for park workers. Critics argue that this amount to a "privatization of public space". While this argument may hold some validity, the plan as a whole, largely privately funded, appears to be beneficial as a whole. First, a tripling of playground space is never a bad thing. Second, the north end of the park, home of the Farmers Market, is nearly 2 city blocks of pavement and nothing else. On rainy days like today, this pavement is a minefield of puddles and plainly put a blight. The greening and resurfacing of the area is a welcome, overdue improvement. Yes, we may end up with another Danny Meyer inspired Shake Shack effort, but there was a bar there before, and who couldn't use a good burger now and then?
Related Articles:
PlanNYC: Union Square Park Redesign (PlanNYC)
What's Danny Meyer Cooking In Union Square? (Observer)
Email Post
Labels: Union Square